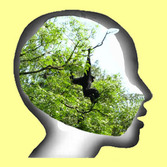 Unsettled, restless, capricious, whimsical, fanciful,inconstant, confused, indecisive and uncontrollable. This, said the Buddha, is the nature of the human mind. It’s like a monkey swinging through the trees which “grabs one branch and lets it go only to seize another” He called this unceasing, undisciplined flow of thoughts Monkey Mind.

Modern science confirms the Buddha’s intuition. Apparently, something like 100,000 thoughts pass through the human mind each day. That’s a lot of through-traffic even if 90% of the thoughts are pedestrian in the extreme. Where’s my other sock? What’s the time? I’m dying for a cup of tea. Must put toothpaste on the shopping list. That kind of thing. On and on and on.

I think my own personal Monkey Mind got its initial inspiration from the behaviour of the tea party chimpanzees I used to watch at the Wellington Zoo as a kid. Those chimps would sit semi-obediently on kindergarten-sized chairs at a kindergarten-sized table a while a zoo keeper in a peaked cap poured them ”tea” from a large metal teapot and served plates of sliced of oranges and apples.

But the chimps only managed to contain themselves for a certain length of time. Inevitably, they would end up snatching each other’s food or abandoning the chairs and tables to canter around their cage on short bandy legs. One or another of them would always make a face - pink-gummed and goofy - by folding back its upper lip to display large teeth.


That monkey - the one with the big, pink, insolent smile and the bared yellow teeth - that’s my monkey. Or at least the Monkey whose Mind inhabits mine. It’s not in the least bit inclined to sit up at a table, nibbling politely at morsels of fruit. It’s a disorderly, hairy, vine-swinging bundle of obsessive-compulsive attention deficit disorder.

However, my Monkey Mind, belonging as it does to a reader and writer, spends most of its considerable energy fidgeting with words and language, especially those in the public domain.

My Monkey Mind is always getting into arguments with public signage. It hates the one aimed at motorists parking at Tahunanui beach. “Lock it or Lose It”, the sign says “car theft occurs when you encourage it”. No! No! No! insists my Monkey Mind … theft occurs because some people are thieves.

My Monkey Mind is irritated by the the sign on the cycleway which says “Dog walkers are encouraged to walk outside busy times”. It hates how coy and indirect it is. My Monkey Mind gets tetchy about the sign at the dairy which says “Please do not ask for credit as a refusal often offends’. Monkey Mind wonders why it doesn’t just say “We don’t offer credit”.

Thankfully, my Monkey Mind is no longer mourning the death of the apostrophe. However it now gets its non-existent knickers in a twist about the unnecessary reincarnation of the apostrophe in almost any word that ends with an “s”.  My Monkey Mind suffers tortures over the logical conundrum presented at the entrances to a toy shop in town: the sign on the front door says “Please join us thru side door” while the sign on the side door says “Entry around the front thanks”.

My Monkey Mind frets about Alcohol Free Zones and Free Range Eggs. It wants to know if the range eggs and the alcohol are actually free, or if it needs to begin mourning the death of the hyphen.

Monkey Mind can be an exhausting companion. I often wish mine would leave me alone and take itself off to some distant tree canopy to do proper monkey-ish things like scratching its armpits and fossicking for fleas.

On the other hand, it is often a source of creativity and ideas. Without its assistance, I’m not sure I could write this column. I don’t mean that a bright-eyed monkey sits down in my place at the keyboard for a fortnight and taps out a column (or the complete works of Shakespeare) right on deadline. It doesn’t work like that. Or not quite like that anyway.

The first car I owned was a Fiat Bambina. It didn’t have a petrol gauge. You just drove it until the 500cc engine (in the back of the car) ground to a halt. Then you flipped a switch to open the reserve tank which gave you enough fuel to drive to the nearest petrol station.

When my brain runs out of gas, it’s my Monkey Mind which reaches over to flip open the reserve tank and make available ideas that would otherwise remain beyond conscious reach.
Browse earler postings ...